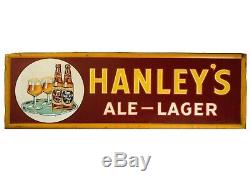 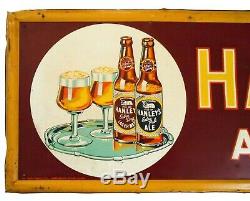 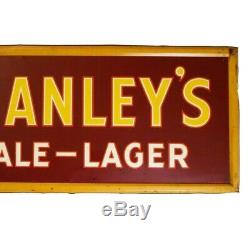 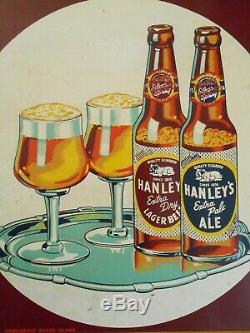 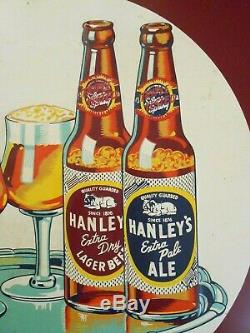 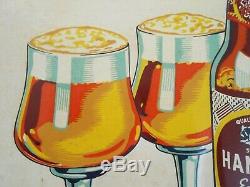 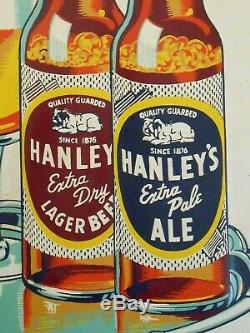 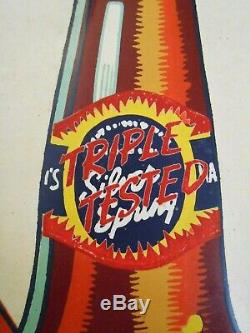 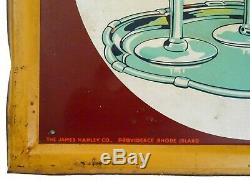 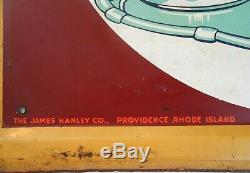 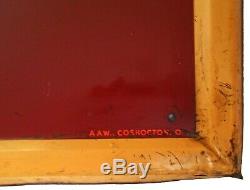 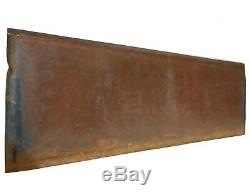 The sign is most likely pre-Prohibition era, meaning it would have been most likely produced before 1920. The James Hanley Company, which produced Hanley's Ale-Lager and which preceded the American Brewing Company which took over later after the conclusion of US Prohibition and the repeal of the 18th Amendment in 1933, was once located on 431 Harris Street, in Providence, RI and was founded in 1892 by James Hanley, an Irish immigrant to the Unit ed St ates. The large turn-of-the-century, multi-story brick building which once housed the brewery still stands and is on the US National Register of Historic Places. The pressed tin enamel sign is a large one, measuring nearly 55" x 19" in size.

The 3-dimensional, raised edges are pressed outwards, as are the letters of the sign and the graphic iconography found in the left pictorial medallion, showing two bottles and two full glasses with frothy beer and the famous bulldog paper label of the Hanley's beer bottles. This piece of early Rhode Island breweriana is particularly rare and in really outstanding overall antique condition. There are a few very minor spots of oxidation and ensuing enamel loss on its face but the enamel remains largely glossy and highly reflective. The colors also are barely reduced or diminished by sunlight and remain saturated and quite vivid.

This is a killer sign. Very Good to Excellent overall antique condition. There are some very minor spots of oxidation to its otherwise nearly pristine enamel surfaces. The rear of the tin sign has moderate oxidation, meaning the sign was at some point hung outdoors and was exposed to the elements.

There's also some minor corner compression and a very slight crease in the tin coming down from the top middle of the sign. All of these defects would be considered minor and don't really interfere with viewing this rare and now nearly 100 year old lithographed enamel, pressed tin beer sign.

The seller is "modsanctuary" and is located in Milford, New Hampshire. This item can be shipped to United States.